Ok I am sure I have been keeping most of you up to date with my current issues with the WSIB (Ontario’s WCB).

I just filed my application for Judicial Review - Certiorari with the court today. I also responded to an e-mail from a lawyer form the WSIB. He wanted a copy of my application. I have no doubt in my mind he has an ulterior motive. That is ok time will as they say tell the test of tales.

In performing my preparations for my Judicial Review, I had notice the WSIB Return to Work Advisor – RTW, had said performing the job of computers was physically suitable for me. However, when I looked closely at their report, they never mention my accommodations or the HRDC working conditions. These are the two KEY pieces of information needed to determine suitability.

Well I wanted to find out, so I called the WSIB. I spoke to the person on the phone and OMFG! I felt like I was on a really fast merry-go-round. I would say I want to ask this board staff member a question. People in legal actions have a right to speak to people and ask them questions prior to the court proceeding. I mean the individual can say I have nothing to say, but this was just stupid. She would say you will have to speak with the WSIAT. I would say to her, what the hell does the WSIAT have to do with this witness, they are at the WSIB and she would then repeat herself. So, I ask to Speak with the President’s office and left a message. I said I would file a motion if I did not get to speak with her.

I then sent an e-mail to Mr. Belec counsel for the WSIB and explained what I wanted from the WSIB to him. I thought he might be a bit more receptive being a lawyer and all. So, Mr. Belec e-mail me right back, faster than my adjudicator (I refuse to say case manager) I admit. He wanted a copy of the application I field with the Court. It seemed like he didn’t believe me, but that’s ok I am used to being accused of being a liar by the WSIB. So, I sent the filed application to him I also unloaded on him as I know a few things about lawyers that they must be nice. I also informed him I would be filing a national class action lawsuit against all WCBs and WCATs in Canada on behalf of all injured workers, this in addition to my application for Judicial Review.
The following is my response and Mr. Belec's e-mail. 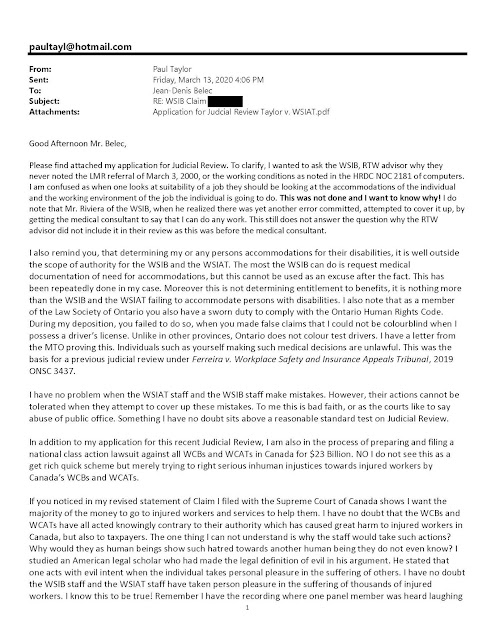 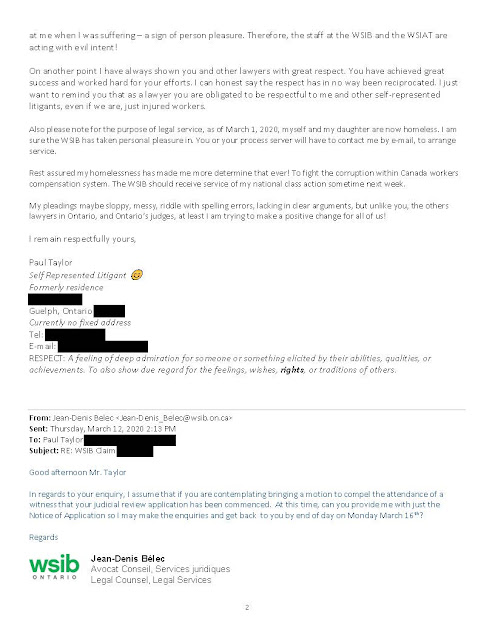 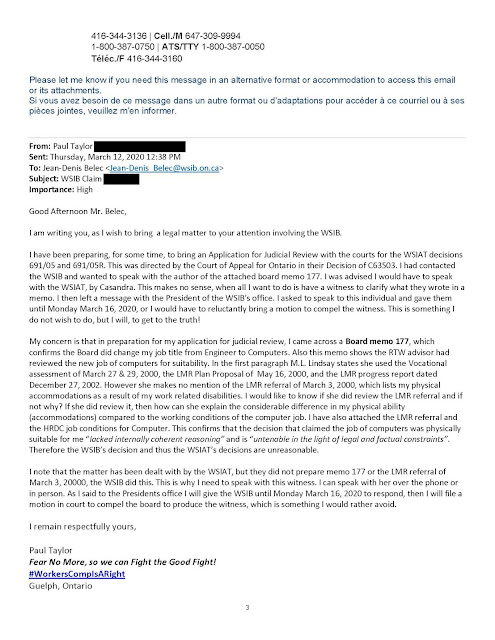 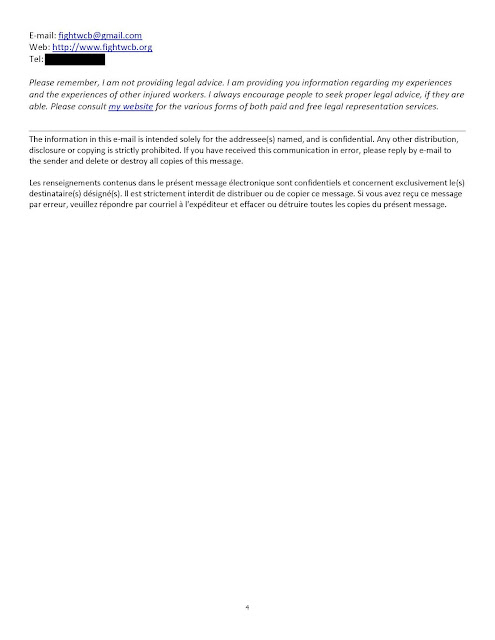 I will be preparing my class action and hope to file it with the court sometime next week.

YES I KNOW I will, if it is certified will let everyone know so they can add their name as plaintiffs.
at March 13, 2020 No comments:

I have realized something about the so-called historic compromise, regarding the Meredith Principles ! Previously I have reluctantly conce...