Freedom of Information Request for Functional Overlay & calculation of benefits

For some time, I have had major concerns with two major issues. The use of a term Functional Overlay, which the WSIB (Ontario’s workers compensation board) claims to be a medical term. I had written a previous BLOG about Functional Overlay here My second concern is how the WSIB calculates your benefits.
I had made many request of information from the WSIB then in January 2020 I made a formal Freedom of Information request. The WSIB provided a response which is available. 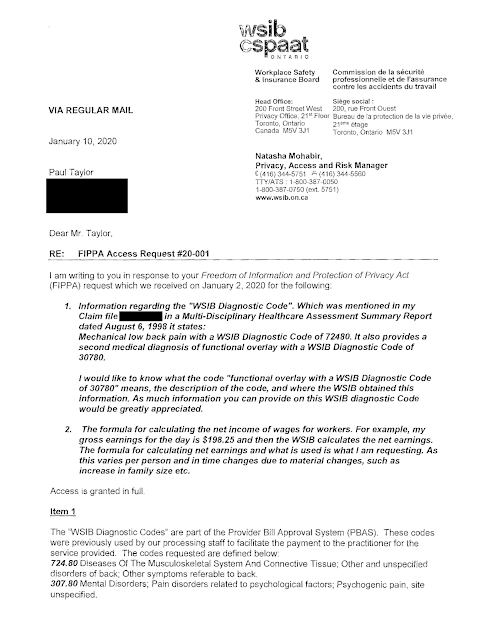 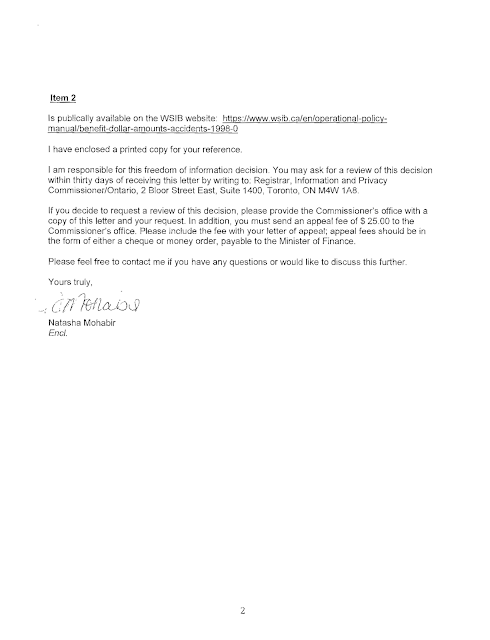 The WSIB, in their response to my freedom of information request, explained that:


“the “WSIB Diagnostic Codes” are part of the Provider Bill Approval System (PBAS). These codes were previously used by our processing staff to facilitate the payment to the practitioner for the service provided.”

So, from reading the explanation by the WSIB, the term is not used as a medical assistive aid to assist doctors in diagnosing injured workers, or even to assist WSIB adjudicative staff in granting entitlement. You see I was very confused by this, as I read a scientific report entitled “Functional Overlay: An Illegitimate Diagnosis?”. The report was published in the Western Journal of Medicine, a reputable journal. The report states the term “Functional Overlay is not a recognized psychiatric diagnosis”. What I found even more interesting is that the report was written almost twenty years before it was used in my case.

What is even more disturbing is I was able to obtain evidence from the WSIAT (Ontario’s workers compensation appeals tribunal) that the WSIAT also made use of this unrecognized and illegal medical term to disallow legitimate entitlement to benefits to injured workers.

I can only speculate at this time but would likely anticipate that this term would be utilized is most cases involving repetitive strain injuries.

This is the second time I have referenced medical scientific research confirming the abuse of the medical community for the benefit of the WCBs. The first was a medical report I previously referenced and was provided to me an injured worker advocate which confirmed Degenerative Disc Disease is NOT age-related, but it is work related. 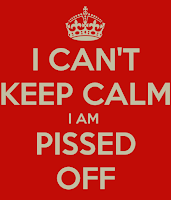 The intentional and deceptive use of Independent Medical Examiners – IMEs to improperly use medical terms and non-medical terms by workers compensation boards and will be one of my facts for confirming the WCBs and the WCTs across Canada have intentionally, knowingly and deceptively abused their public office to be unjustly enriched at the cost of denying legitimate claims for workers compensation!


Information request for calculation of benefits:

The second concern I raise, is how the WSIB makes payment to injured workers, like all WCBs in Canada. Injured workers who suffered a worker injury prior to January 1, 1998, received 90% of their net pay. After January 1, 1998, injured workers would receive 85% of their net pay. Now I am sure many get this confused. So, I will explain it here. Our gross pay is what we are paid before taxes. Our net pay is what we get on our cheque, after all the deductions. Our net pay is normally calculated by our employers. Our employers provide a detailed break-down with what is paid out on every pay stub. How much we pay in federal taxes, provincial taxes, OHIP and so on. They do this because it is the law. The WSIB, on the other hand, does not. The WSIB is provided a gross salary by your employer when you are injured on the employer’s report of injury form. From this the WSIB calculates your net earnings. And you are paid either 90% or 85% depending when you were injured. What is very problematic is that the WSIB never tells you or I what is the calculations used to get to net pay. Now many may argue it is all the same, but it is not. A single person’s net pay will be much lower than a married person with dependents. This is also why when an injured worker family status changes they are to notify the WSIB. When my daughter was born in 2006, I notified the WSIB, but no change was made in my benefits. Since that time, I have been fighting with them just to be told how they calculate my benefits form gross to net. Obviously with very little success! One would think it the providing of such information would be very transparent. That I should have received a letter from the WSIB when I was first injured that confirms the accident, the areas of injury, the accepted gross reported amount and the calculation for net income. One would think a letter would go something to the effect of

This letter is to confirm on accident date, description of accident, this resulted in you injuring your areas of injuries.  As a result, your gross income has been accepted at gross daily pay rate, per day.  It was also reported by your employer that you are Family composition and household income. Therefore, your net daily pay rate is net daily pay rate. This has been based on your family composition, household income and allowable tax credits. Therefore, as you work accident occurred prior/after to January 1, 1998 you will be paid income replacement benefits at the rate of 90%/85% of your net daily pay rate for each full day you remain off work.

The information in the above form-type letter, which I created in two minutes, is crucial information an injured worker needs to fight any future appeals. to understand their claim and provides for true transparency. I believe the WSIB intentionally leaves this information off so they can make up any dollar amounts they wish with no required proof!

What is also very disturbing is that the Net pay calculation is something that very few are informed of by the WSIB or any WCBs, if any. Moreover, we are never told the calculation used to get to Net pay, so if a mistake is made, we can have it corrected.

Like the first issue of Functional Overlay, I had been after the WSIB to provide the calculation for my benefits. Then in January 2020, I filed a freedom of information request, with the WSIB. I was expecting to see something to the effect of:

Mr. Taylor your gross pay was accepted as $198.25 per day. From this your net pay was calculated at $_____, per day. This has been calculated based on your family status of being single, married etc. which is __.

Instead the WSIB provided the answer of a copy of WSIB policy 18-01-03, which was useless to say the least. It provides for minimum and maximum benefit dollar amounts, but it makes no mention of if your income is in between the min or max.

Therefore, after receiving the WSIB’s response to the above two concerns, needless to say, I will be pursuing a review with the Information and Privacy Commissioner of Ontario for this WSIB decision. This will be on the simple basis that the first concern and request for information was not answered. I asked where did the WSIB (not the doctor) get the term from? Additionally, I had also asked how my Net pay was calculated and I was provided a policy which did not provide the information.

Please let me know what you think!

I have realized something about the so-called historic compromise, regarding the Meredith Principles ! Previously I have reluctantly conce...